As crowds stood outside Grand Parade in Cape Town placing flowers, where the first black president of South Africa Rholihlahla Nelson Mandela gave his first speech after being released from prison. 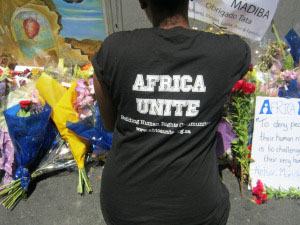 Africa Unite human rights peer educators joined the whole world on the 10th December in commemorating the inspirational and humble life of a leader who served his people. We remember him as a human rights icon, referring to his work and words:

“For to be free is not merely to cast off once chains, but to live in a way that respects and enhances the freedom of others.” Nelson Mandela

We, as youth pledge to continue his legacy in building an Africa that celebrates our differences, that we may treat each other with respect and dignity – hoping that our leaders will follow in the same foot-steps in leading from behind and putting others first.